Over the years, Nebraska has garnered a reputation as a “fly-over state” full of cornfields and uninteresting pastures. But we’re here to crush that misconception—because the Cornhusker State is so much more. Sure, we do have our fill of cornfields, but our amazing state also features incredible rock formations, breathtaking rivers, interesting man-made structures, and more.

Read on for a list of our favorite views that can only be found in Nebraska. And the next time you’re dreading a road trip through the state, think again! You might just find some views you never expected. 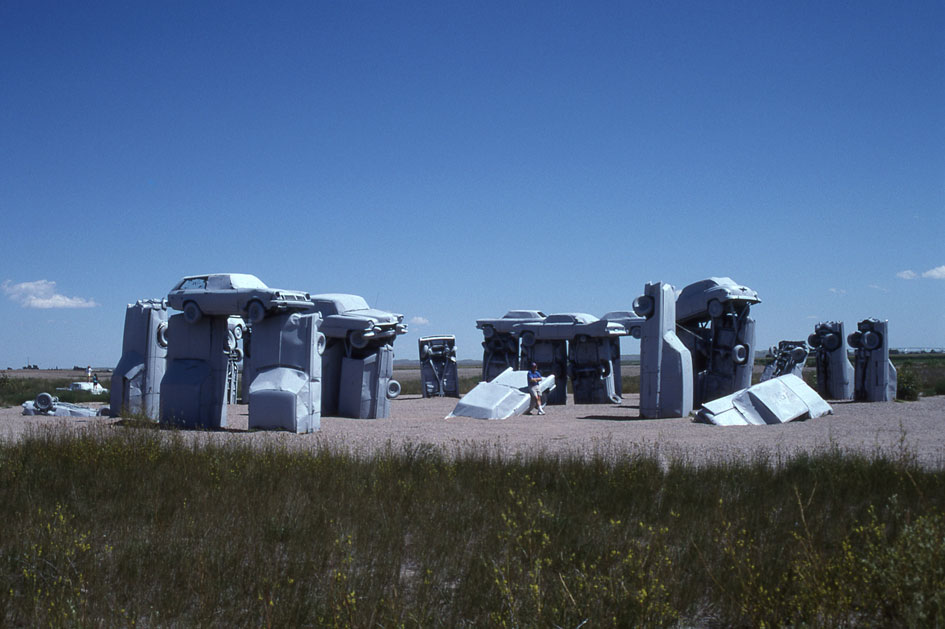 This unique replica of the world-famous Stonehenge in the UK, deemed “Carhendge” was constructed of old cars in 1987 by Jim Reinders and his family in memory of his late father during a family reunion. The surrounding site also includes sculptures made of old cars and car parts, offering a unique view that you won’t be able to find anywhere else. Want to pick up a souvenir while you’re there? Head to the Gift Shop and Visitor Center for a physical memory and more information on the area.

Nebraska’s first state park, Chadron State Park, was founded in 1921 and is nestled among the distinctive buttes and canyons of Nebraska’s Pine Ridge. Since its founding almost a century ago, this park remains a popular spot for camping, hiking, fishing and more. Between the trails in the park and in the adjacent Nebraska National Forest, a hiker or biker will find more than 100 miles of beautiful trails and old roads suitable for all experience levels. So no matter where you decide to explore within this extraordinary piece of land, you’ll be greeted by a view unlike any other. 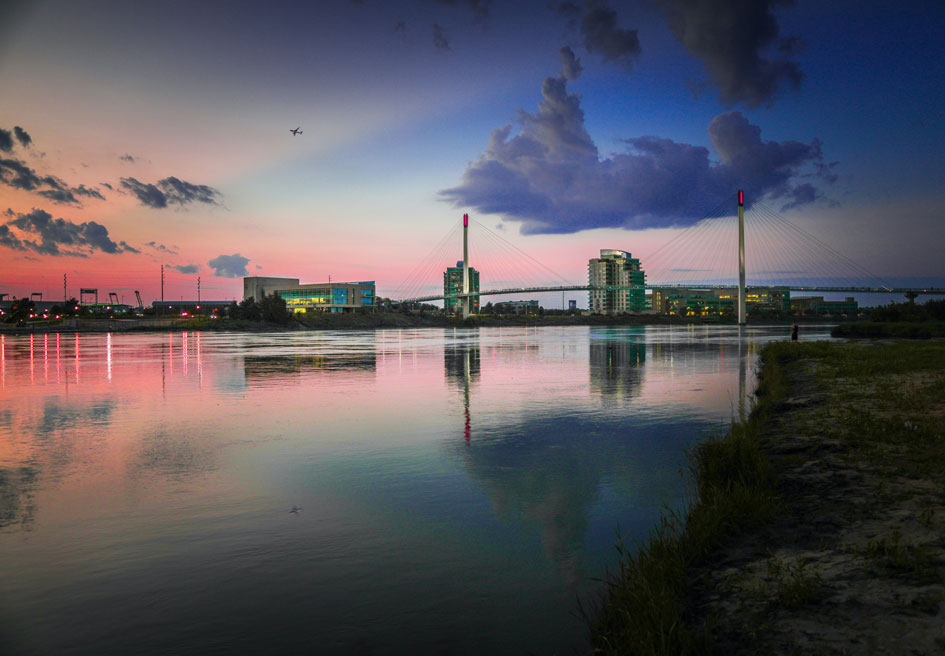 The Bob Kerrey Pedestrian Bridge (more fondly known as “Bob the Bridge”) is one of Omaha’s most famous and cherished landmarks. The 3,000-foot steel structure spans the Missouri River and connects Omaha to Council Bluffs via a pedestrian walkway, offering fantastic views of both cities. And because the bridge crosses the state line that separates Nebraska from Iowa, you can claim to be standing in two places at once!

Warmer days are perfect for visiting Lincoln’s Sunken Gardens. This was the only Nebraska garden listed by National Geographic as one of the 300 best to visit in the US and Canada, and it’s not tough to see why. The grounds are absolutely breathtaking at any time of year, but especially when the flowers are in full bloom. Each year, you’ll find an annual floral display featuring more than 30,000 plants designed and arranged to represent a new theme each year. 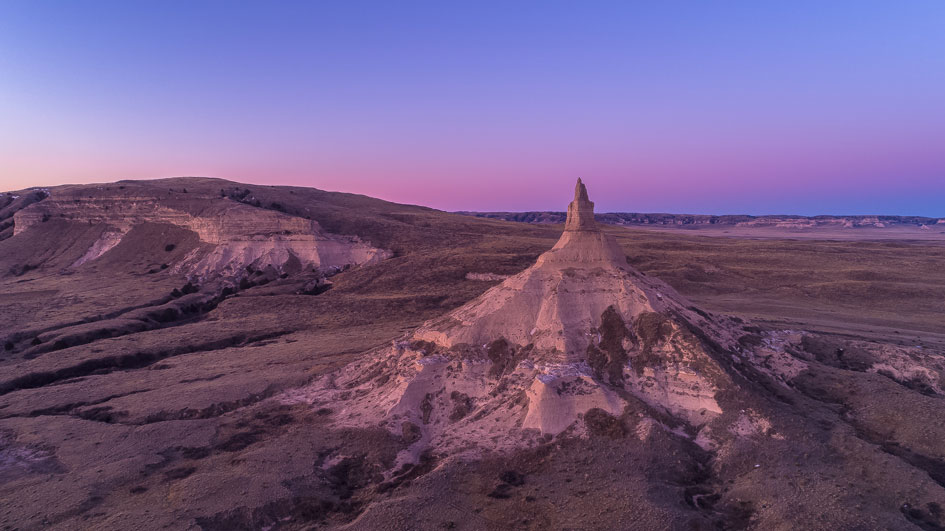 Arguably one of the most iconic western Nebraska landmarks, Chimney Rock is a symbol of the great western migration. Located approximately four miles south of Bayard, at the south edge of the North Platte River Valley, Chimney Rock is a natural geologic formation, a remnant of the erosion of the bluffs at the edge of the North Platte Valley rising some 325 feet from a conical base. The view of the geological tower settled among rolling hills is so perfectly Nebraskan that it is a must-see on your next road trip. If you have time, we also recommend stopping by the Chimney Rock Visitor Center nearby, which houses museum exhibits, media presentations and more.

The 76 miles of the Niobrara National Scenic River winds through dramatic bluffs, incredible wildlife diversity, gorgeous waterfalls, world-class fossil resources, and plenty of floating fun for the whole family! But while being in the river itself is pretty phenomenal, seeing it from above is a whole new experience. One of our favorite spots to view it is on the Cowboy Trail Bridge near Valentine, an old railroad bridge that offers views of the river and the historic Bryan Bridge.

Located near Bridgeport, the Courthouse and Jail Rocks are the erosional remnants of an ancient plateau that bisected the North Platte River. The rocks sit at over 4,050 feet above sea level and rise more than 240 feet above nearby Pumpkin Creek. Looking almost otherworldly, these rocks were once important landmarks on pioneers’ journey westward. Once you see these incredible formations, you’ll stop associating Nebraska with cornfields for good.

Everyone has heard of the Grand Canyon in Arizona and you may have even heard about other “mini” grand canyons in other states. But the last place you would expect one is right outside the tiny village of Wauneta in southwestern Nebraska. Known formally as the Frenchman Creek Valley, locals refer to it as Nebraska’s Little Grand Canyon. The vista itself is breathtaking, featuring a rolling landscape and views for miles. A little viewing area is open for you to stop and take pictures—which is highly recommended.

The Platte River is a major river in Nebraska, flowing over 1,050 miles through the state and into Wyoming and Colorado. And if you’ve spent any time in Nebraska, you’ve probably driven alongside it, swam in it or even basked in the sunlight on its sandy shores. Because it flows through the entire state, it isn’t hard to find a good view of the Platte River. But a few of our favorites include the observation tower at Eugene T. Mahoney State Park near Ashland, which soars 70 feet in the air and offers sweeping views of the river, and the observation tower at Platte River State Park near Louisville, which reaches into the sky even higher at 85 feet and a view beyond words—especially at sunrise. 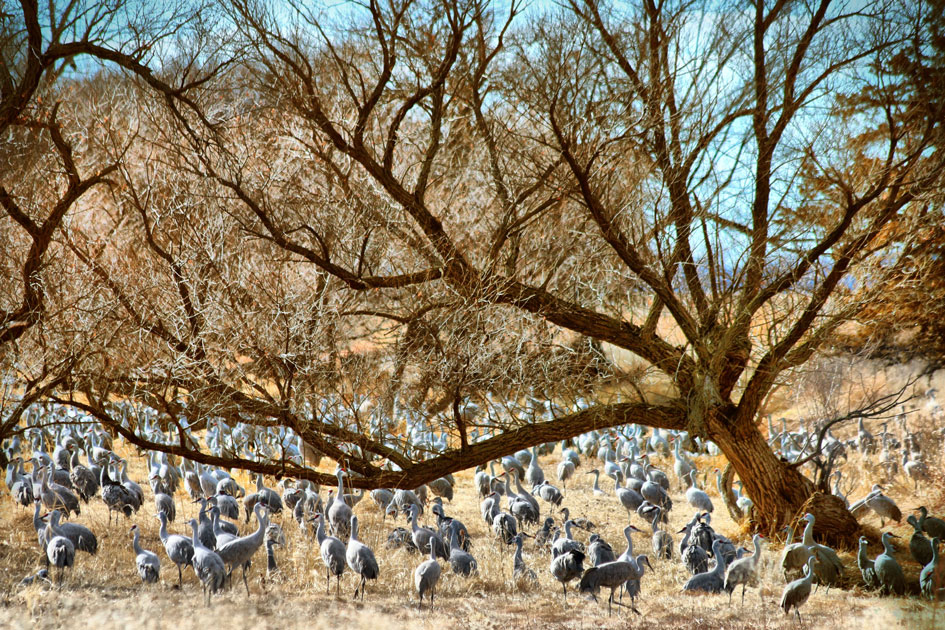 Each year, from late February to early April, over 600,000 Sandhill Cranes migrate on the Platte River Valley in order to “fuel up” before resuming their northward migration. The sight is absolutely staggering. One of the best spots to enjoy it is the Fort Kearny State Recreation Area in Kearney, where you can watch thousands upon thousands of birds fly around the area from the top of the Fort Kearney Hike/Bike Bridge which spans over the Platte River.

Panorama Point, also known as Constable Mountain, is the highest natural point in Nebraska at an elevation of 5,429 feet above sea level. It is located in southwestern Nebraska in Kimball County, near the point where Nebraska and Wyoming meet Colorado. Despite its name and elevation, Panorama Point isn’t on a mountain or a hill, it’s merely a low rise on the High Plains. Regardless, the spot—marked by a stone marker and a guest register—offers a complete, unobstructed panoramic view of those neverending prairies Nebraska is known for.

Towering 800 feet above the North Platte River, Scotts Bluff has served as a landmark for westbound travelers for centuries. Located near the city of Gerring in western Nebraska, this National Park Service site protects over 3,000 acres of historic overland trails, mixed-grass prairie, rugged badlands, towering bluffs and, of course, incredible rock formations. One of our favorite views in the entire state is the sun setting over Mitchell Pass—we promise, there’s nothing like it.

Among the Oglala National Grasslands lies a section of sparse desert where water and wind over millions of years have carved the dusty earth into dramatic, fantastical shapes. Though the terrain is full of a wide variety of formations, from chunks of broken sandstone to deeply eroded hills of ancient volcanic ash, it is the mushroom-shaped rocks that gave the place its name: Toadstool Geological Park. Seemingly something out of Star Wars, Star Trek or another fantastical, sci-fi world, this spot doesn’t exactly scream “the midwest”. But we encourage you to explore it for yourself! This interesting park features a one-mile-long interpretive loop trail where you can scramble over spectacular cliffs and formations to see the fossilized remnants of ancient horses, saber-toothed cats, brontotheres and more.

What do you think?

What views on this list are you dying to see for yourself? Let us know in the comments!

17 Autumn Beverages in the Omaha Area to Indu...

The leaves are changing, the weather is cooling and pumpkin is all the rage—fall has officially arrived!...

In the early 1970s, Becky Mattson of Lakeside, Montana created a special "Good Neighbor Day" for her community...