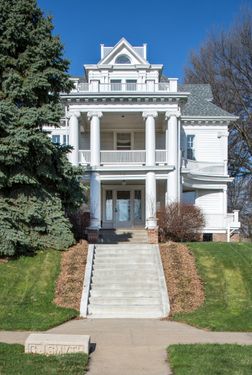 An amazing combination of neoclassical design, incredibly convenient location and high-tech upgrades make this home the best of all worlds! This impeccably restored turn of the century gold coast area mansion is currently the ASID Designer Showhouse and has all the bells and whistles. Gorgeous custom woodwork throughout. New state-of-the-art gourmet kitchen, high-efficiency HVAC , and updated bathrooms. Rare 4 car garage and beautiful, fully functional carriage house. Over 2/3 acre of pristine, private grounds includes a gorgeous fountain for this magnificent Omaha landmark! History of the Home: The Smyth House was built in 1906, on a lot originally owned by Omaha’s first mayor, Jesse Lowe. The lot was purchased by Constantine J. Smyth and his wife Kate. Smyth, an Irish immigrant who had worked his way through law school, was a rising star in Omaha’s legal/political world and an ardent supporter of William Jennings Bryan. The architect of the Smyth house is unknown, but the house clearly reflects the classical revival language of that era’s columns on its 38th Street façade. While the Smyths sought to impress the outside world with their grand front porch, the interior of the house is attuned to quiet family life. The main feature of the central hall is a tiled fireplace emphasizing the role of the home as a place of shelter rather than of show. In 1913, following the election of Woodrow Wilson, Smyth was appointed Special Assistant to the Attorney General of the United States. Since Wilson visited Omaha twice while the Smyths lived on 38th Street, the stories of a president visiting the house are quite possibly correct. On Easter Sunday, that same year, a tornado ripped through Omaha, destroying many houses in the Gold Coast neighborhood. The Smyth house was relatively undamaged and the Smyths were able to offer hospitality to the Religious of the Sacred Heart whose school, Duchesne Academy at 36th and Burt, had been nearly demolished. In 1917, Smyth was appointed Chief Justice of the Circuit Court of Appeals of the District of Columbia. The Smyths moved to Washington and Walter Stickel, president of Midwest Motor & Supply Co., lived in the home before it was sold in 1919 to Ingvard and Drexeline Sibbernsen, the parents of Smyth’s son-in-law. The Sibbernsens also purchased the two lots adjoining the house. It was then that the garden was laid out, and Thomas Kimball, Omaha’s leading architect, was commissioned to design a garage to house the family’s electric car. In 1945, former Douglas County Commissioner Thomas O’Connor and his wife Kathryn bought the home. In 1948 they asked the Omaha Planning Commission for permission to build a duplex on their property at the corner of 38th and Webster streets. The request was denied. The lot remains open today. Following Thomas’ death in 1951, the home was sold to his daughters, Agnes and Nell O’Connor. Agnes and Nell were both teachers for Omaha Public Schools. In 1977, following Agnes’ death, it was bought by the Boganowski’s who began restoring the house to its former glory. The home was the site of the 1980 Designer Showhouse. The home sold in 2003 to John B. Campbell and Robin Tait the current owners. Since purchasing the home, the owners have remodeled the kitchen, done exterior work and repainted some of the rooms and are now ready to reveal the revival of their Neo-Classical home.

This data was last updated on Oct 1, 2022. The data is subject to change or updating at any time without prior notice. All properties are subject to prior sale or withdrawal. The information was provided by members of The Great Plains Regional Multiple Listing Service LLC Internet Data Exchange or members of the Broker Reciprocity program of the Southwest Iowa Association of Realtors (SWIAR) and is copyrighted. Any printout of the information on this website must retain this copyright notice. The data is deemed to be reliable, but should be independently verified as no warranties of any kind, express or implied, are given. The information has been provided for the non-commercial, personal use of consumers for the sole purpose of identifying prospective properties the consumer may be interested in purchasing, and any other use is prohibited. The listing broker representing the seller is identified on each listing.