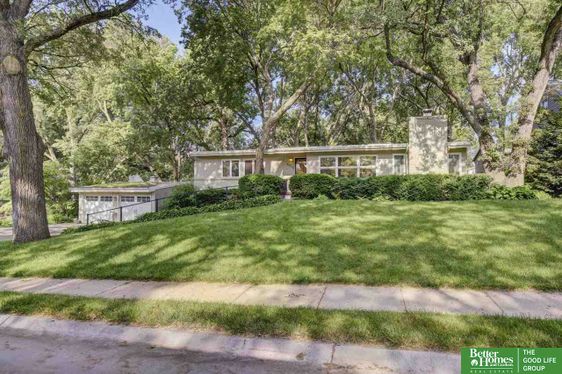 Open House Wednesday, 6/16 form 5-7PM! You do not want to miss this hard to find ranch in popular Lakoma Heights in Ralston. This home sits on a double lot totaling nearly half an acre and includes beautiful gardens and landscaping that have been maintained by a professional gardener. In the kitchen you'll find an amazing center island with butcher block countertops, high-end stainless steel appliances, a pantry with pull-out shelves and two skylights to bring in that natural light. The dining area is like a sunroom with large windows and a sliding glass door leading out to the awesome patio. And there is also a cozy den with a fireplace! Other features include a 4th non-conforming bedroom in the basement, a newer rubber roof that has a lifetime warranty, newer HVAC, well-maintained hardwood floors, no maintenance vinyl siding and a sprinkler system.

“Small town with-in a city” is a phrase which literally describes Ralston.  Surrounded on three sides by Omaha and the fourth by LaVista, its boundaries are difficult for the eye to see. But spend a little time driving its streets and visiting with its citizens and you’ll soon sense its small town charm, pride, and friendliness. As a reflection of its annual Fourth of July celebration, it is known as Independence City USA. And while its magnificent parade and fireworks display attract many from all over the metro area, it is also looked upon as a “homecoming” for many former residents –a time to meet, reminisce, and enjoy the food, music, and fun. Currently, home to approximately 7,200 citizens, it has retained its own city administration including a mayor and city council. It is served by its own police, fire, street maintenance, and parks and recreation departments, as well as a library, and a pre-K-12 school system (6 elementary schools, a middle school, and a high school). Ralston’s Chamber of Commerce is very active and works diligently to attract new retail outlets, service centers and light industries to the central core as well as to the outer perimeters of the town. One of the town’s major entertainment attraction is the Ralston Arena. Only a few years old, it is a multi-function venue with a large arena, an ice skating rink, and separate rooms which are perfect for meetings, parties, and receptions. The arena hosts a semi-pro hockey team, an indoor football team, a women’s roller derby, craft and trade shows, professional music presentations, as well as numerous civic and school activities. The ice skating rink is open to the public and provides lessons and activities for kids of all ages.  Ralston also has a popular keno parlor, an active community theater, and a thriving senior center.  For those looking for an active lifestyle, there are athletic fields of all kinds, a public golf course, and a swimming pool. Single family homes of many styles and price ranges are found on the tree-lined streets of the town, and there are numerous apartments and town homes which cater to all ages. While some citizens commute to downtown Omaha or surrounding cities for employment, many work in Ralston or in industrial or office parks found close to its perimeter. With its many amenities, comfortable, well-maintained homes, and churches of many denominations, Ralston is the community of choice for people of many ages and demographics.

Sorry, there are currently no properties available that meet this search criteria

This data was last updated on Aug 2, 2021. The data is subject to change or updating at any time without prior notice. All properties are subject to prior sale or withdrawal. The information was provided by members of The Great Plains Regional Multiple Listing Service LLC Internet Data Exchange or members of the Broker Reciprocity program of the Southwest Iowa Association of Realtors (SWIAR) and is copyrighted. Any printout of the information on this website must retain this copyright notice. The data is deemed to be reliable, but should be independently verified as no warranties of any kind, express or implied, are given. The information has been provided for the non-commercial, personal use of consumers for the sole purpose of identifying prospective properties the consumer may be interested in purchasing, and any other use is prohibited. The listing broker representing the seller is identified on each listing.