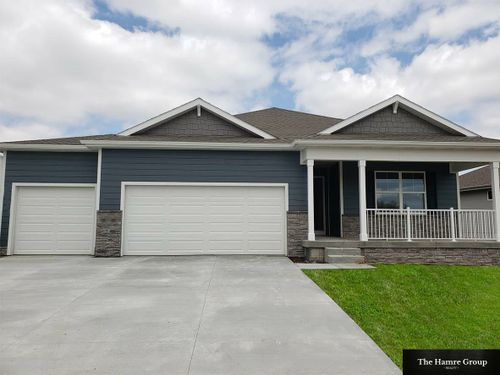 MOVE-IN READY! D.R. Horton, presents the popular HAMILTON home at SPRINGFIELD PINES in SPRINGIELD. This floor plan provides 3 bedrooms and 2 full baths in a single-level, open living space. The main living area offers solid surface flooring throughout for easy maintenance. Two large bedrooms are situated in the front of the home and the primary bedroom, which features a large walk-in closet and ensuite bath, is situated in the back of the home for maximum privacy. Enjoy entertaining in the spacious kitchen with a large built-in island, beautiful cabinetry, and stunning, quartz countertops. The entry from the garage also has a conveniently located closet for coats and jackets. A partially finished basement also features a rec room, offering additional living space. All D.R. Horton homes also come with an industry leading and energy efficient suite of smart home products, including a video doorbell, programmable thermostat and more!

Springfield is a friendly community of 1,500 people located on Highway 50 approximately 10 minutes south of Omaha.  Because of its easy commute to many business and industrial areas in Omaha, Papillion, and Bellevue, it is a popular residential site for people of all ages wanting to live in a smaller community. Established in the early 1870’s by Capt. J. D. Spearman, a Civil War Veteran, on a site where it was rumored that the Missouri-Pacific would locate, it soon became a viable community named Sarpy City.  However, a few years later that rumor proved to be false and the railroad located several miles from the community.  A man of foresight and ingenuity, Capt. Spearman purchased and platted another section of land which was beside the railroad and moved all the buildings from Sarpy City to the new site, with the exception of the school house.  He gave the city a new name, Springfield, to reflect the many springs located on the west edge of the city.  From that point on the city existed as a self-sustaining, farming community, with typical swings in its economy and population brought on by abundance and drought, World War I and the ensuing depression. Today, the community is surrounded by many beautiful homes on acreages while the town itself has developments with many newer homes as well as bungalows and restored “farm houses”.  The town has pride in its recently renovated Community Building, its three churches, its splash park and baseball and soccer fields, its downtown revitalization and its proximity to the Mo Pac Trail system.  For many years the city has hosted the late summer Sarpy County Fair at its modern facilities.  And  it celebrates Springfield Days in early June.  A modern library, several art galleries, and a vineyard with live music provide entertainment.  Platteview Senior High School, it joins Platteview Central  Junior High, Springfield Elementary and Westmont Elementary to educate South Sarpy School District 46’s enrollment of over 1000 students. For additional information: http://www.springfieldnebraska.com

This data was last updated on Feb 7, 2023. The data is subject to change or updating at any time without prior notice. All properties are subject to prior sale or withdrawal. The information was provided by members of The Great Plains Regional Multiple Listing Service LLC Internet Data Exchange or members of the Broker Reciprocity program of the Southwest Iowa Association of Realtors (SWIAR) and is copyrighted. Any printout of the information on this website must retain this copyright notice. The data is deemed to be reliable, but should be independently verified as no warranties of any kind, express or implied, are given. The information has been provided for the non-commercial, personal use of consumers for the sole purpose of identifying prospective properties the consumer may be interested in purchasing, and any other use is prohibited. The listing broker representing the seller is identified on each listing.