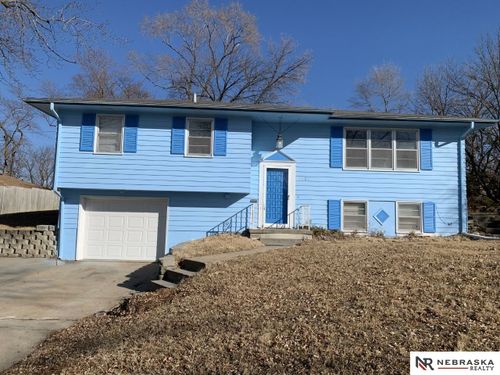 This spacious 3 bedroom home with 1 car attached garage and 4 car driveway is waiting for you! Enjoy the wood floors in the living room and bedrooms. Home features a great amount of closet and storage space. Relax on the large, freshly painted back deck. The home's exterior was just painted as well. This home comes with a pool membership to the neighborhood high point pool that will be transferred to the buyer! Home is being sold as-is. AMA

From N 30th street, turn north on Forest Lawn Ave. Turn left at Northridge Dr, and home will be on the east side of the street.

North Omaha is a large geographical area composed of many smaller neighborhoods with a rich historical and cultural background. It’s geographical boundaries consist roughly of Cuming and Dodge Street on the South, 72 nd Street on the West, Omaha’s city limits on the North, and the Missouri River and Carter Lake on the East. Bemis Park, Country Club, Miller Park, Minne Lusa, Saratoga, NoDo, Florence, Benson, Fontenelle View, and Adams Park are just a few of the neighborhoods found in the area. Historically, it is noted as being the site of the Mormon Pioneers’ Winter Quarters, the birthplace of Malcolm X, the Fort Omaha Historical District (home of General Crook’s headquarters), and the birthplace of jazz artists Preston Love and Buddy Miles. Noted athletes Bob Gibson, Johnny Rogers, Gale Sayers, Ahman Green and Bob Boozer were all born and raised in the area. The area is the site of modern housing developments as well as homes built in the Arts and Crafts, Romanesque, Tudor, and Queen styles. There are also many bungalows and Cape Cod homes found in certain neighborhoods. North Omaha is a sustaining community working hard to provide more business and manufacturing opportunities for its citizens. Several big box stores and have announced plans to locate in the area; and entrepreneurs are opening specialty shops in many sites along Maple Street, 24 th Street, 30 th Street and 16 th Street. The North Omaha Business Park is the home of several businesses and is diligently working to attract others. Creighton University and Metropolitan Community College have large campuses in the area and health care is readily available through the Creighton University Medical Center, and the Charles Drew Health Center. With magnet schools and community activity programs the neighborhoods are working conscientiously to provide a comfortable life-style for the citizenry.

This data was last updated on Feb 6, 2023. The data is subject to change or updating at any time without prior notice. All properties are subject to prior sale or withdrawal. The information was provided by members of The Great Plains Regional Multiple Listing Service LLC Internet Data Exchange or members of the Broker Reciprocity program of the Southwest Iowa Association of Realtors (SWIAR) and is copyrighted. Any printout of the information on this website must retain this copyright notice. The data is deemed to be reliable, but should be independently verified as no warranties of any kind, express or implied, are given. The information has been provided for the non-commercial, personal use of consumers for the sole purpose of identifying prospective properties the consumer may be interested in purchasing, and any other use is prohibited. The listing broker representing the seller is identified on each listing.